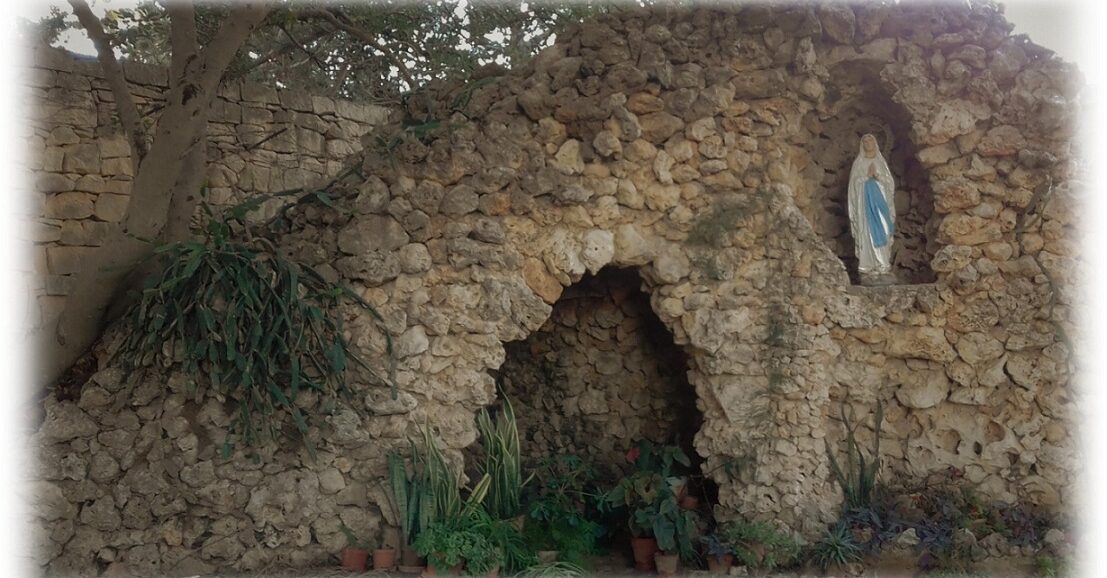 The Call of Sr Maria Dolores

When the Lord calls he never grows weary and continues to call us until we give our ‘YES’. He is never disheartened, He perseveres, He insists, has patience with us, until we respond to Him. His call becomes stronger until we start to understand. When we go through rough moments, He shows us His love and fidelity. He shows us that He has great confidence in us.

The Lord called me during my childhood years. He brought me closer to Him in little steps in many small ways and signs which at the time I didn’t understand fully. I remember my mother recounting that one particular day when she took me and my twin sister out in the pram a Cardinal’s car was passing by. The Cardinal asked the driver to stop the car. (An International Congress of the Clergy was being held in Malta at the time), the Cardinal came out and blessed us. Today I see this as a sign of being chosen from so many children that the Cardinal could have seen on his way, he chose to bless us! Whenever I experience something like this that a person shows interest or attention, I ask myself ‘Why, what might this mean?’.

I remember that once after adoration, I went in front of the statue of the Sacred Heart of Jesus, I felt Him telling me ‘Come and follow Me’. It was clear and strong. I was overwhelmed by such words, I pondered over them a long time and yet I couldn’t understand. After a few days, I forgot all about it. I lived as normally as possible, however, I felt drawn towards the Holy Eucharist. Adoration of the Most Blessed Sacrament became a source of peace, happiness, tranquillity, and rest for my soul. The adorations moulded me and filled me with His love and I quickly became enamoured with His company.

When one co-operates with the grace of the Lord, with an open heart, He strengthens all our weaknesses. He removes all our weaknesses and fills us with courage and moulds us slowly without our noticing. In His infinite gentleness, He acts according to our own pace.

On another day whilst I walking in the streets of my town, I happened to pass in front of a church, and I felt the Lord inviting me to enter and stay awhile with Him. But I was afraid and kept walking. When I pondered about it I felt the Lord reprimanding me. The week after I obeyed Him and paid Him a visit. That day I left the Church with so much peace and happiness like I’ve never felt before. From that day onwards I kept going more frequently near the Lord and intensified my time too. I sought different churches to be near Him, I looked for occasions and different times of the day to be near Him. Daily chores were done in haste so as not to miss my rendezvous with the Lord. Once I attended a 3-hour adoration during the afternoon. I was very close to where the Blessed Sacrament was exposed, and it was there that I felt Him calling me again.

I felt I needed to open my heart with someone to help me understand what the Lord was asking from me. I sought the help of a Franciscan friar, who later became my Spiritual Director. He helped me through prayer and discernment to understand the Lord’s Call. After a long discernment, we realised that the Lord was calling me for a consecrated life as a religious sister. So I started going on weekend experiences in some convents. However, when I decided to enter the religious life, my mother was struck with a serious illness and I had to attend to her. After her death, I didn’t want to leave my father all alone, so I remained home. After a few years, he passed away. After six months the Lord called me once again.

I felt an inspiration of the Lord asking me “when are you giving me your definite ‘yes’?” He added, “I won’t be asking you for great things”. And finally, I told Him ‘Yes’. It was the 25th of March the feast of the Annunciation, my ‘yes’ was one with Our Lady’s ‘fiat’. I intensified my prayers. I started seeking what kind of vocation the Lord was asking from me. I asked for a sign from the Lord to better understand. I particularly asked Him for a clear sign either verbal or written. The Lord in His wonderful kindness sent both verbal signs and written ones. At first, I couldn’t believe and I didn’t want to accept what He wanted although these were very clear. I spoke to my Spiritual Director and after discernment and a live-in experience within the monastery of the poor Clares, the time came for me to take the decisive and most important step in my life.

Today four blissful years have already passed since my first step. Now I am a Professed Junior, waiting eagerly to take my Solemn Vows and become totally His.